Today I was reminded about how amazing Oklahoma Red Dirt is! It’s just a city lake. Not much to do there, and it’s not very scenic; however it’s home. Where no one buys a white swim suit or swim trunks because it will come out brown. It’s so influential an entire music genre was named after it. My little boy discovered just how fun OKLAHOMA RED DIRT can be. 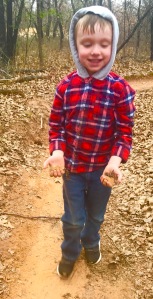 All day I watched him play in the red clay dreading the stained pants, and brown bath tub. At the same time I saw him making memories. Memories that will turn into roots, and those roots run deep in the Oklahoma Red Dirt!

Where I wrecked my first car, I tore it all to pieces. I learned the path to heaven. Is full of sinners and believers.

Learned that happiness on earth. Ain’t just for high achievers

I’ve come to know.There’s life at both ends. Of that red dirt road”-Brooks and Dunn